Working Title Productions was born at a coffee shop in Manchester when friends and theater colleagues Amanda Pawlik and Jackie Marcoux got together to catch up.  As the conversation progressed Jackie mentioned how she had a few plays that she would love to hear read out by a cast that is familiar with the play and who fit the ages of the characters she has written.  Amanda commented on her love for directing and how she would love to direct new work that she was passionate about.  With crowded schedules, both women wondered if there was a way to have new work directed and read out to an audience that did not require a large time commitment by those involved.  Through their conversation, Working Title Productions was formed with the mission to support new plays in all stages of production in New Hampshire.

Amanda is a theatre director with a passion for new work and ensemble-created theatre. Her recent directing credits include The Dining Room (Jean’s Playhouse), A Flea in Her Ear and Arcadia at the University of Hartford, Stay Sharp (O’Neill Theater Center), The Boy Who Drew Cats (World Premiere, The Winnipesaukee Playhouse) and the national tours of The Wonderful Wizard of Oz, A Christmas Carol, and the world premiere of Beauty and the Beast with Hampstead Stage Company.

In addition to directing, Amanda has an extensive background in artistic leadership and producing. She is the founder and director of The Mythology Project, a collaboration with actors and playwrights to create short plays inspired by mythology. The project is currently in its fourth year, having explored Greek, Norse, and Slavic mythology in 2015, 2016, and 2018 respectively.  It is housed at the Windsor Art Center, where Amanda previously served as executive director.

Amanda is a proud member of DirectorsLabChicago. Driven by her passion for new work and bringing creative people together, she is looking forward to continuing the work of the Granite State Playwright’s Workshop and Working Title, providing a platform for creativity in New Hampshire while supporting the work of its local writers and artists. 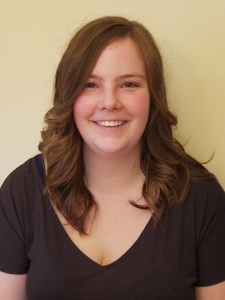 Jackie is a lifetime New Hampshire resident and is a graduate of the  UMass Lowell Masters in Community Social Psychology (May 2017).  Throughout her life she has been active both in front of and behind the stage. Her directing credits include Captive Audience (The Acting Loft), The Angel Intrudes (Nashua High School North), Cuffed (Dramatis Personae), Cinderella and the Fairy Godmother’s Spell (Dramatis Personae), Last Friday Night (Connectivity), and Help! (Connectivity).  Most recently in NH, Jackie has stage managed for M & M productions (God of Carnage, Other Desert Cities) and was an Ensemble Member in Chess the Musical (Windham Actors Guild).
She has also created a theater based peer intervention group at her undergrad that uses theater to educate students about topics such as suicide, binge drinking, sexual assault, and partner violence.  This group has performed at freshmen orientation and for Greek life.  The group educates outside of the theater by going into freshmen classes and aids in creating an impactful Take Back the Night event by performing poems and monologues written by survivors of sexual violence.

Jackie is also an active playwright whose work has been performed in New York City (A Light in the Dark, 2015).  Her play Divine Intent was selected for the inaugural Granite State Playwrights Workshop (2016) and her play Last Friday Night was performed at the University of Hartford in 2014 .  She looks forward to the opportunity to create a space for playwrights to hear their work in order to improve it as that has assisted her tremendously in improving her own work.